There is a hashtag trending right now that our nation’s finest middle and high school students are utilizing to show the world how deprived and unfortunate they are. 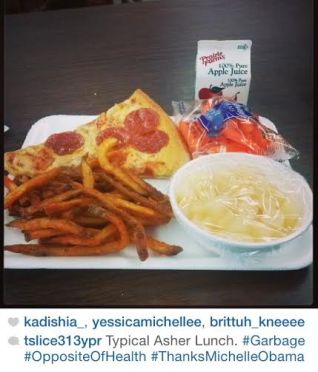 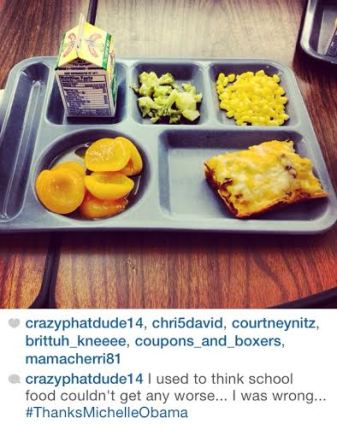 I get that tweens and teens are outraged because of the smaller portions and splatters of mystery meat on their flimsy trays, but I can’t help but feel a little outraged myself while looking at their complaints. And their parents aren’t behaving any better.

It’s food. Consider yourself fortunate because you are being served food. In your school. That you are attending for free. And you either rode the free bus, or your parent drove you there. In their car. Without trying to sound all “there are starving kids in Africa”…seriously. There are starving children and adults all over the world. Probably even within a few miles of the homes that the complaining children live in. Imagine how different the hashtags would be if somehow a homeless or starving child were able to post to Instagram. 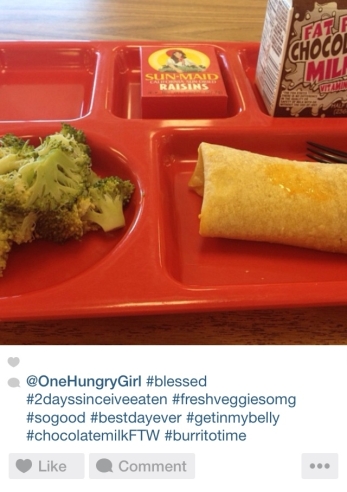 Michelle Obama didn’t cook your lunch. Unless Michelle Obama was the cranky, sweat-stained, hair-netted woman serving you from behind the lunch counter, then your complaints are ridiculous and irrelevant. Michelle Obama has just as little to do with your menu and school lunch as Barack Obama has to do with the brand of tampons I buy. She has helped put dietary guidelines in place, but did not write your specific menu. Public schools need to follow those guidelines, but they also have the freedom to create meals within the budget they have been given. Sure, the budget may be modest, but posting your grievances on social media, I promise you, is doing nothing to change your situation.

Trying to complain at the federal level right off the bat is futile. Why not talk to your school principle? The kitchen manager? Start a petition, offer suggestions, do anything other than post your crappy 1960’s filtered photos on Instagram and Twitter.

Pack your own lunch. It really is the simplest solution to your lunchtime woes. I’ve seen people rebuttal with, “But what about those who can’t afford to? What about those who are on free government meal plans?” I understand that, some people can’t afford to pack lunches for their kids every day. So I sincerely hope that those children are not the ones uploading photos to Instagram and Twitter and hashtagging them #thanksmichelleobama. Because if you can afford a smartphone and not a peanut butter and jelly sandwich? Shame on you.

Stop being dramatic. I feel like a 90-year old woman griping about “kids these days”, but seriously. KIDS THESE DAYS. School lunches have always been awful.I remember when I was in high school, the cafeteria would serve (really nasty) pizza Monday through Wednesday. Its crust was stuffed with a rubbery substance that was supposed to resemble cheese.Then on Thursday and Friday, when the pizza was too old to serve, we would get cheese sticks. They would literally cut the crust off the stale pizzas and serve them in paper baggies and call them “cheese sticks.” I totally embraced the gross. I looked forward to cheese stick day, even knowing how wrong it was. 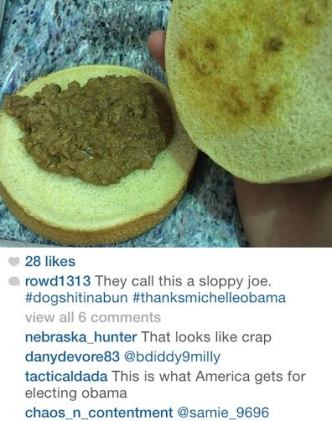 Gross school lunches are part of what make the entire public school experience. They connect people. They turn strangers into instant friends when it’s realized that you guys had those weird Minute Maid frozen treats at your school?! ME TOO! 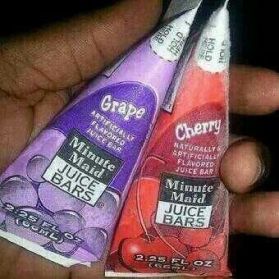 Even well into adulthood, I have somehow gotten onto the topic of school lunches with acquaintances and even though our high schools were thousands of miles apart, we basked in the greasy, preservative-filled, processed food memories of school lunches.

It is bad, and probably does need to change. I do agree that school lunches can be awful, and I’m not disputing the fact that they have probably gotten worse since the new government regulations came into play. I’m just disgusted at the lack of perspective in today’s children…and parents. It is a well-known joke nowadays that whenever anything bad happens, you can blame it on Obama. A bird crapped on your freshly washed car? #ThanksObama. Your boyfriend cheated on you? #ThanksObama.

And those are jokes that only came into existence because people are actually saying shit like that! These tweenie boppers and their miserable parents are actually pissed off at Michelle Obama for their sub par lunches in their little towns that nobody has ever heard of. Please. For the love of cardboard pizza and gelatinous baked beans, stop the horse-blinder perspective, hateful spewing on social media. Realize what you have and are complaining about is what so many others are praying and wishing for.

PS This is not some politically charged post– I didn’t even vote for Obama. And I’m not obsessed with Michelle Obama, even though her arms are pretty killer. It’s the principle of blaming “the man” for all of your problems. And first world problems at that. Please parents. Take your children to volunteer, have them serve the homeless, give them a reality check so that their “problems” are put into perspective. 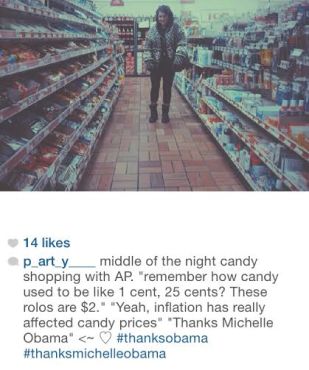 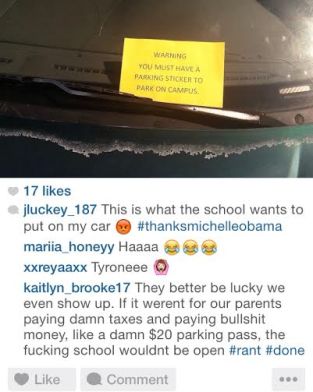 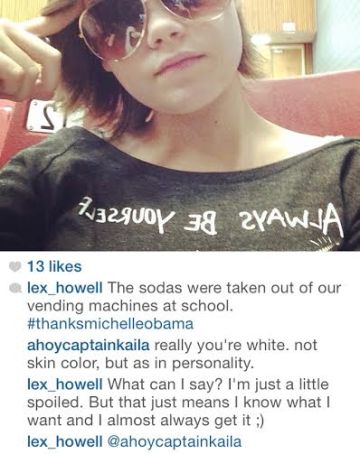