It never occurred to me that there was a problem with the way I approached confrontation with my loved ones. I spewed my feelings, raised my voice, overreacted, brought up past grievances I had been marinating in, and went into every argument with one goal in mind: to be the victor. I believed that arguing in relationships was always a bad thing, but if I could fight and claw my way into the winner’s circle and coerce an apology out of my partner, I would gain his respect and admiration. I wasn’t afraid of admitting guilt and apologizing when I was wrong– I just never thought I was wrong.

Until one day my boyfriend of eight months reality checked me with this poignant, calm declaration during a fight: “We’re not doing this anymore, this is not how our relationship is going to be. We can have disagreements and arguments but we are going to talk about them calmly like adults. You’re not going to raise your voice and name call, and you’re not always going to be right.” My knee-jerk reaction was to do what I had always done before when called out: pack up and leave. But he was different– we were different. For one of the first times in my life, I practiced some serious introspection, and my findings were alarming.

He was right. I didn’t know that there was a different way to fight– one that was constructive and healthy. A way that didn’t make each person feel violated, defensive, and permanently bruised afterwards. This is how my boyfriend (now husband) taught me to fight.

1. I can’t get mad simply because he is mad. 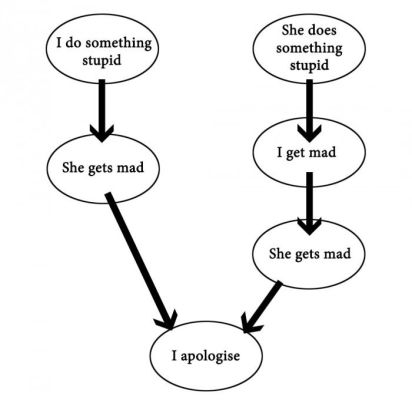 A sad reality for many relationships

It was extremely difficult for me to even realize I was doing this in my relationship. If I was called out or confronted on something, I was instantly furious. I rationalized that “if you cared about me you wouldn’t be getting mad at me for this, and that makes me mad.” It creates a lack of trust because your partner will never feel like they can be honest with you and let you know when they are upset.

2. No raised voices or name calling. One time, very early in our relationship, I told my (then) boyfriend that he was “acting like a dick.” I didn’t even call him a dick, I said he was acting like one. I’ll never forget the look in his eyes and the tone of his voice– he calmly told me that I would never call him a name ever again. And I haven’t. As it turns out, when you aren’t raising your voice and name calling, you can organize your thoughts better, express yourself more clearly, and a resolution is so much easier to achieve.

3. One person is not always going to be right– practice being objective. It’s impossible for one person to always be wrong or right. The jokes that the “woman is always right” can be amusing, but also dangerous. I believed that– I thought that was how relationships worked and it was how everyone else was operating because people joked about it at such great lengths. Fact: unhealthy relationships operate this way. Objectivity is not something that comes natural to everybody, so practice! When in an argument, pretend you’re giving relationship advice to a friend– what would you tell her? With every single argument, force yourself to write down three reasons that your partner or spouse is actually right, or their feelings are valid. Even if you believe 100% you are right, do the exercise. Then revisit the discussion and see how it goes. You can still have your opinion, but now at least it will be more understanding. 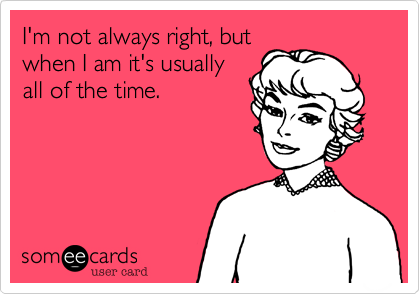 4. Research your personality type. Okay, so my previously explosive fighting style was not totally my fault. As an INFP, I am an introverted, feeling, perceiver which is a really loving and compassionate personality type, until she feels like she has been wronged or is being attacked. Then she gets nasty. My husband, on the other hand, is an INTJ– so he is an introverted, thinking, judging type. He is naturally calm and analytical, hence his horrified expressions when I would erupt with red hot emotion and rage. After researching our respective Myers-Briggs personality types together, it was like something clicked. I suddenly understood why he acts the way he does, and he began to understand my quirks too. I can’t encourage this enough– study your personality types and learn how each person operates. It will feel like you are reading a Spark Notes on your significant other.

5. Avoid generalized, black and white thinking. I used to have an incredibly difficult time separating isolated incident A from husband’s overall character and motives. If he did something that made me upset, I felt like it was a reflection on his entire core character. I would get angry and throw out blanket statements like, “you always think about yourself first” or “you always make me feel like this.” I didn’t take into account the millions of other things he did to take care of me, protect me, and make sure I was happy every single day. Because in the instant that I became unhappy, he was a bad guy and everything he ever did was bad. This global thinking is what I see in so many relationships, and I recognize it so fast now because it’s exactly how I used to operate. It’s what I believe leads to years of resentment and pent up anger. Just because someone messes up doesn’t discount all of their good qualities. Learn to look at each incident separately, and unless it truly is a behavior that is repeated and is not being worked on, don’t throw the baby out with the bathwater. Everyone messes up, and a mess up is not indicative of a bad person. Ya know, unless their mess up is murder of infidelity.

My husband and I rarely fight anymore. In fact, I can’t remember the last real argument we had. When we do have them, they are always calm discussions. I almost look forward to them in a weird way because I know that I will get the chance to explain myself, and that my husband will listen to my input and will genuinely try to understand my point of view. And I do the same for him. Arguments are now a learning experience and a chance to understand each other’s perspectives more deeply.

If you’re in an arguing rut with your significant other, take some time to explore your fighting style. View it as a social experiment– try on some different types of boxing gloves and see which ones are constructive, and which ones only do damage. You may also be surprised with what you find.

14 thoughts on “The Art of Argument: How Learning to Fight Saved My Relationship”