Ten years ago I was a freshman in high school, sitting in my first period cooking class in Fairfax, VA. My teacher turned on the television at about 9:30 am so we could see the news, she had heard that a bomb went off in the Pentagon. A few minutes after turning on the television, we realized it was not a bomb, but a terrorist attack in the form of an airplane.

I stared at the TV screen speechless, not believing what I was seeing. My teacher broke the deafening silence in the classroom, “Courtney, your sister is here to get you.” I looked at the classroom door and saw my older sister, Charlotte, with tears in her eyes. I quickly packed up my books and asked Charlotte what was going on. Our dad worked in the Pentagon and nobody had heard from him yet. Mom said to grab me and come home. I will never forget that drive home. It was the most beautiful day, not a cloud in the sky. The roads in Northern Virginia were empty (for once), everyone at home glued to their TV sets. At that point I wasn’t too worried about our dad; I was only 14 years old and at that age, everyone I loved seemed immortal.

I did start to worry when a few hours had gone by and we still hadn’t heard from dad. Everybody in the U.S. was busy calling their loved ones, so every phone line was jammed. Finally we got in touch with my dad, and he made it home safely that night. It took several hours just to get out of the District.

My dad’s life was spared in two ways (that we know of) on September 11, 2001. Both are reminders that when seemingly bad things happen, there may be a reason behind it! That morning my dad was in his office about to head to the ATM in the 4th corridor of the Pentagon. He realized something was wrong with his computer and alerted tech repair who sent him a message stating that he was not allowed to leave his office until they arrived, as it was a “critical trouble call.” While he was waiting on tech repair, one of the hijacked airplanes hit the Pentagon, destroying the 4th corridor.

One year before 9/11, my dad had applied for a new position working with the Navy’s Counter Drug Command, also in the Pentagon. He ended up not getting the job and was extremely bummed; with his prior counter drug experience, he was perfect for the job! The gentleman who was given the job instead of my dad died on September 11th, his office hit by Flight 77 . I will never look at a crashed computer or a declined job the same way again.

I simply cannot imagine the past ten years without my dad in them. In my mind, they couldn’t exist without him. In ten years he has left me thousands of voice mails, sent hundreds of “I love you” texts, mailed dozens of cards, and dedicated hours of time to my me and my family. He is a constant reminder that good men DO exist, and was there to assure me that I had finally found one when I met Isaac.

My heart breaks today for those who did not get to spend the past 10 years with their fathers, mothers, sisters, brothers, or friends. I don’t know why my dad’s life was spared on that day, but I do know that I cannot imagine my life without him. I am forever grateful for the gift of 10 precious years with my father.

Dad and his girls! 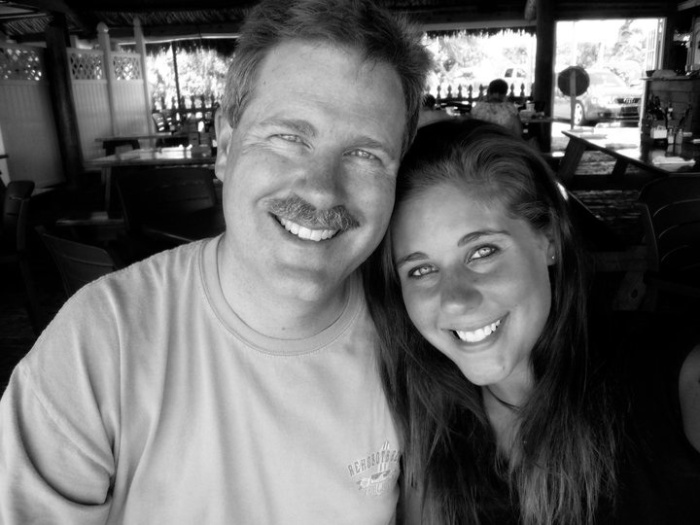 Romans 8:28 “All things work together for good to those who love the Lord and are called by His name”