It’s been quiet here on The Other Courtney, meaning the real Courtney has been really busy. Not with anything fun, though, I assure you.

Okay, I lied. The sleep study was actually a little fun for me. I enjoy new experiences and this was unlike anything I had experienced before. I also learned a lot about sleep disorders and the brain in general from the technician who glued an absurd number of wires to my body. The results of my study were actually really anticlimactic so I’m not going to drag it out into a blog post of its own. The doctor said I had one of the best sleep studies he’s ever seen (where’s my gold star?) and I have absolutely no REM behavior disorder. Woohoo! This means I simply have a sleepwalking disorder, which is great considering the medical problems they were ruling out. Only 2% of adults have sleepwalking disorders, so I’m going to go ahead and take this as medical proof that I’m “gifted” and special and rare, like a fine wine or a diamond. Yeah, something like that.

As long as I don’t hurt myself in my sleep, or those around me, they are not worried about my nightly wanderings. If things get really bad again (meaning night terrors and 3-4 episodes per night), I just need to talk to the docs and possibly get some Klonopin to take at night before bed. 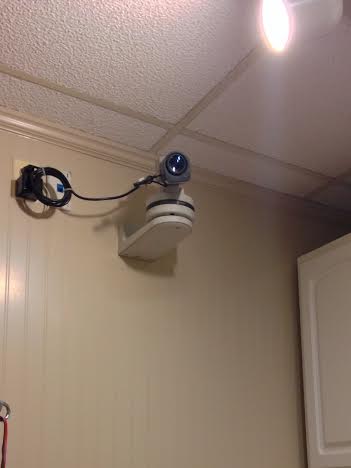 Last Wednesday, there was some major excitement here in North Carolina because we were about to get hit with some major snow. We all went home early from work on Wednesday and said “goodbye” to our coworkers knowing we wouldn’t see each other again until Monday. I hit up the grocery store and Isaac and I prepared to get snowed in- which meant I bought 3 quarts of ice cream, chicken fingers, and seltzer water. Essentials, I tell you.

Everything was going great. The sky was dumping out globs of snow, the fire was crackling, and I was about 6 bowls into my mint chocolate chip ice cream binge when I started to not feel so good. I know, weird. So I ate an orange, reasoning to myself that my stomach just needed some citric acid to balance out the dairy.

Thirty minutes later I was hugging the toilet in a way I’ve never hugged a toilet before. Isaac assured me that the citric acid/dairy combination was the reason for my vomiting, that it would just have to get out of my system and I’d be fine. He kept using the word “curdling” until I insisted he stop. When you are throwing up, I think “curdling” might be the worst word in the English language.

Anyway, I kept barfing and barfing. For the next 9 hours, I threw up every thirty minutes. I cried on the bathroom floor, I had a mild anxiety attack wondering if it was an allergic reaction to something, and then I threw up some more. I’m pretty sure I could have qualified for an Olympic event with the level of vomiting I was reaching. My husband was a complete angel and stayed awake with me all night until I insisted he go to his room at 5 am or so. 24 hours later, my temperature hit 101, I was still throwing up, and felt severely dehydrated so we decided to take a trip to the hospital. By this point, we were pretty dang sure it wasn’t the ice cream and oranges wreaking havoc on my belly. I’m not one to ever beg to go to the Emergency Room, but I knew it needed to happen. I could barely focus my eyes and was having a hard time walking, so off we went.

Three liters of fluids, two horse pills of potassium, and some nausea meds later, we left the emergency room and I felt a bit more human. I was incredibly thankful for Isaac who tended to every single one of my needs for 4 days straight. Even when I looked at him with the saddest puppy dog eyes and said “I think my whole room smells like diarrhea”, he hugged me tighter and didn’t laugh (too much) as he whispered, “yeaahhh.”

I dare say that the whole experience was almost worth it just so I could receive these text messages from my husband who was trying to motivate me into drinking more water. His “water remixes of pop/R&B/rap songs” not only made me laugh, but actually did help me drink more fluids. He knows how my brain works. Also, the Avril Lavigne remix almost made me barf again I laughed so hard. How does he even know that song???

(water = wazz or wazzer in our house FYI)

Amazing, right? I am so very lucky.

So now It’s been 8 days since this all started and while I still don’t feel 100%, I’m getting there. I’m still on anti-nausea medicine and my appetite is almost non existent, but hey I’ve lost 8 pounds since leaving the hospital so there’s always a silver lining! When this is all over, I’m not sure I’ll ever be able to look a saltine cracker in the face again.