Most parents just want their kids to be happy, whether that means driving a garbage truck or curing cancer. And most children have high aspirations for their future careers and goals.

While my little kindergarten friends were presumably telling their parents of their dreams to become firefighters, police officers, astronauts, and doctors, I had a different idea of a “dream job.”

At the ripe age of 5 years old, I insisted that I wanted to be a taxi cab driver. My dream did not come without conditions, though. I told my mom that I really wanted to be a taxi cab driver but she had to ride with me at all times in case “bad guys” got in my car. Looking back, that was a pretty smart game plan for a 5 year old. I was well aware of “stranger danger” and realized that if I was going to have to drive strangers around all day, mom better be with me. Little did I know that this was merely the beginning of my anxiety struggles and that cute sense of “stranger danger” would turn into “holy crap every man wearing a hoodie or driving a van is going to rape and murder me.” I blame the crime shows.

Anyway, after moving to Monterey, California in grade school, my taxi cab fantasies faded and I developed a new obsession and career goal: dolphin training. Spending weekends at Fisherman’s Wharf and going whale watching with my marine mammal conservationist aunt opened my eyes to a new world, an underwater world. I knew that I had to get closer to those ginormous, beautiful, finned creatures.

But dolphin training always seemed like a job that was as “wishful thinking” as becoming an astronaut or a rocket scientist. Sure, it sounds nice to dream about but do people actually do that?

An emotionally abusive boyfriend of mine in high school told me to “focus on something that you can actually do with your life, you’ll never be a dolphin trainer. Stop kidding yourself.”

Two years later I posted these pictures on Facebook: 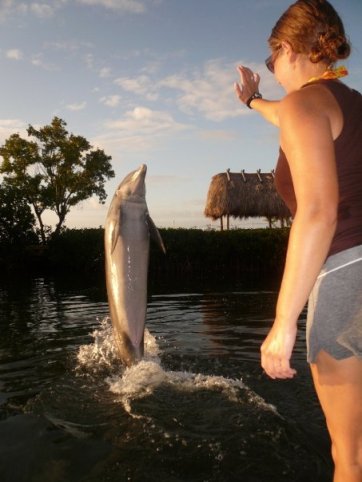 And my EX-boyfriend was the furthest thing from my mind. Also, dolphins kiss way better than that loser did anyway. And so did the cute intern named Isaac…who I now call my husband. Life has a funny way of working out.

As quickly as my dolphin days started, they came to an end. I ended up having to leave the Keys (long story, will tell later) and moved back to North Carolina. My jobs since then have ranged from waitressing to college administration, which I’m currently doing.

Is it dolphin training? No. Does it even come close to how fun that was? Errrr, no. But it is satisfying in a completely different way. 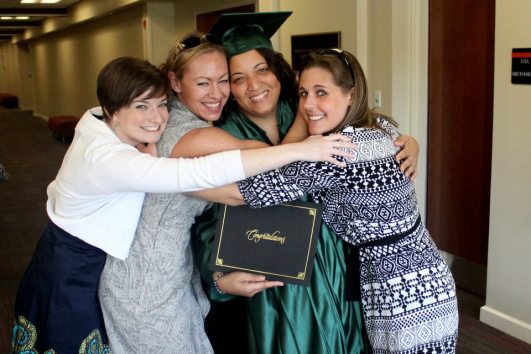 I have learned a LOT about myself through the different jobs I have had. This current job has taught me that I am really good at staying organized and writing complex schedules and reports. It  has given me confidence in my ability to be a competent and valuable employee no matter where I go from here. It has also taught me that I am definitely introverted and can only handle human interaction for a few hours at a time. Eight hours a day is just too much time to be talked at/to. Maybe that’s why I am naturally drawn to animals, and why I have a true love/hate relationship with an office job.

So while taxi cab driving, dolphin training, and Registrar-ing don’t seem to be related, they kind of are. No matter what job I dream of doing or have done in my past, they all center around service for others. I have to do something that makes a difference, something that makes someone’s quality of life better. Even with dolphin training, part of the reason I enjoyed the job so much was because I got to witness people of all ages having an incredible, life changing experience. If you’ve ever swam with dolphins, you know what I mean.

I don’t know what my next adventure or future career will be, but I look forward to it knowing that I’ll be making a difference and helping those in need. Hopefully it will be working with babies or hairless animals (dang allergies). Or preferably hairless baby animals.

WordPress Prompt: When you were 10, what did you want to be when you grew up? What are you now? Are the two connected?