There is something wrong with our sweet new puppy, Henry.

We discovered it last week when we took him to the vet, and it was both startling and confusing.

All was going well until the doctor checked Henry’s reproductive organs. With a semi-concerned look he said, “I can’t find his testicles.” I can only imagine the worry that spread across Isaac’s face as the doctor searched for our little boy’s jewels only to come up empty handed, quite literally.

He did more frisking down under and said, “I can’t find his penis either.”

With Henry in his arms, the doctor broke the news to Isaac that our sweet little boy was missing both his testicles and penis.

Don’t worry though, there is a name and long-term prognosis for little boys who are missing penises, testicles, and all things male…it’s called BEING A FEMALE.

It is with my tail between my legs that I share with you- our little “Henry” is a female. Yes, we lived with him (her) for a whole week and did not realize he was a she until a medical professional broke the news to us.

The most necessary face palm ever

In our defense, we had no reason to look at our puppy’s genitals. We were told we were given a boy puppy and believed that his manly parts would be there. Sure, Henry pee’d like a girl, but all puppies do! Sure, I didn’t notice a certain protruding sex organ from his lower abdomen, but I thought maybe our little boy just drew from the short end of the stick where genitals were concerned .

Isaac called me after the vet appointment and I’m fairly certain my jaw hung open for 5 minutes straight. I couldn’t stop saying “what? I don’t get it? How did this happen?” 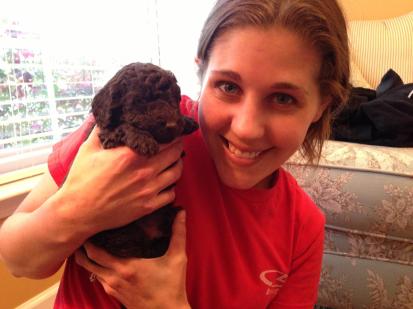 When Isaac went to go pick up our boy, the breeder accidentally grabbed the puppy with the yellow piece of yarn around her neck, the colors were very similar and I even remember thinking that when we went to play with the puppies several weeks ago.

The breeder was mortified. She and her husband apologized probably 20 times, but we insisted it was an honest mistake and didn’t change how much we loved our puppy, male or not. Admittedly, we were pretty bummed at first. We both really wanted a male dog, and his name was “Henry” for a reason. The money we bought Henry with was left to Isaac by his deceased grandfather, Henry. Henry the human loved animals and we wanted to do something with the money that he would have approved of- so we got a dog.

We were given the option to bring our puppy back and get the one we had reserved, but we decided to keep her. As Isaac so eloquently stated in his email to the breeder:

“Thank you again, and I apologize for the long email. I just don’t want you two to feel bad, everything you’ve done has been perfect, and we are so grateful it worked out. I know grandad is up there laughing away at this whole situation, and that in itself is even more comfort that this is definitely the right decision.”

I felt good about our decision. I immediately went to Petsmart and got Henry a new name tag:

“Henry” is now “Henri” and no it is not pronounced ahn-ree, we still call her hen-ree. She is our awesome, smart, silly, cuddly, tom-boy dog.

Isaac and I believe that things happen for a reason, and there is a reason we were given yellow ribbon puppy instead of tan. We couldn’t be happier and we are falling more in love with her every day. 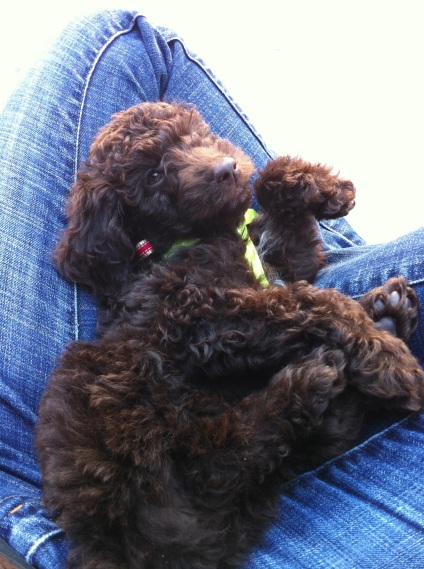 21 thoughts on “The Case of the Missing Jewels”