Jesus Camp is a documentary that came out in 2006. It follows an Evangelical Church as they take their youth group to a summer camp to teach them about witnessing to non-Christians. I have never watched the film until this past week because I wasn’t sure if I would be offended by it. When I think of “Church Camp” I think of the camp I went to every summer growing up, Grace Bible Camp. We spent our week at camp dirt biking, shooting rifles, making crafts, making up plays, meeting with small groups, and trading snacks at the “canteen.” I also attended a summer camp on Catalina Island one year. Every night we went to sleep under the stars and to the sound of the Pacific Ocean. My memories of “Church Camp” are so wonderful that I didn’t want to watch this documentary that was potentially making fun of such places!

Because of all the rapture-talk lately, Isaac and I have had several discussions about what could possibly be going on in these people’s heads. I personally don’t find the rapture jokes funny at all. It seems like everybody’s facebook status on the 21st and surrounding days was something along the lines of  “updating my status from heaven, it sure is great up here!” It’s not that the jokes infuriate me by any means, I just feel like they are mocking the whole idea of the rapture and Christianity. Sacrilegious I guess would be the word. It’s funny because I even have preacher friends who were making rapture jokes! I guess everyone deals with it in their own way. The most frustrating thing about it to me was people who would write “Looks like I have been left behind with all the other sinners!” Or how Camping said himself “the righteous will be saved and the sinners will remain on earth.” We are ALL sinners.

OK back to Jesus Camp. Five minutes into the film, I realized that this church’s “Jesus Camp” was nothing like the camps I attended growing up. The children were convulsing on the ground, speaking in tongues, sobbing into the camera. I have never seen anything like it. I have seen videos of people speaking in tongues before, but not children. What the heck is that?! I don’t believe that it is actually the Holy Spirit speaking through them. I also don’t believe they are completely putting on an act. Here is my opinion: The children have been brainwashed in a sense. They enter a state of hypnotism when they are in these conferences to the point that they lose control of their bodies and believe they are being used as a portal by the Holy Spirit. The children’s pastor even said “Give me five minutes with a child and I will be able to get them to speak into tongues.” That just doesn’t make sense to me. She was so “holier than thou” acting and was instilling the same attitude in her child-followers.

I think it is so wrong to brainwash your children with religion. I think you should raise your children so that they can make an educated decision about what they want to believe and how they want to live. If you want to raise them in the church, by all means do so!! But allow them to ask questions and be curious about other beliefs. If you don’t let your child have any real-life experiences and homeschool them until they are 18 years old, what do you think will happen to them? Not teaching them about evolution is not beneficial to them. Like anything in life, it is better to know ALL the facts and make an informed decision. Like I’ve said in one of my other posts, I don’t believe you can truly and whole-heartedly believe in something until you have doubted it at some point. Every Christian has doubted their faith at some point. Every Buddhist has, every Jew has, every Muslim has. It’s what we do as humans. These poor children in “Jesus Camp” weren’t allowed to question their religion, it seems.

Something I found interesting is the way the hardcore Pentecostal parents talked about politics! They talked about how George Bush was selected by God himself to help save the country. These same people, no doubt, probably were the ones saying Obama is the anti-Christ and a worker of the Devil. What gives them the right to make either of these claims? Unless Gabriel or God himself came to them and told them these little tidbits, they are simply putting their personal opinions out there and claiming it is what God has declared.

In conclusion, I think the documentary gave a lot of good perspective. I hope someday these people will see that walking up to someone in a bowling alley and saying “You should be a Christian or you will go to Hell” is not the way to witness to people. Talk to them. Love them. Be friends with them. Accept them.

John 13:35- “By this everyone will know that you are my disciples, if you love one another.” 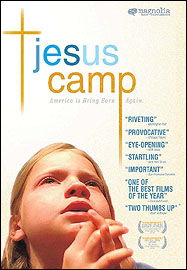