The other Courtney seems to have two sides: very sweet and thoughtful or pissed off and hell-raising. It kind of makes sense actually. At both of my jobs (the college and Noble’s Grille) I am constantly having to keep a smiling face on while people tear me a new one or throw nasty insults at me. One of my favorites so far is from a student who every time I see her she says “umm how old are you, are you old enough to be doing this job?” HAH! So naturally in my head I create these horrible comebacks to say to her; my sisters know the wrath of an offended Courtney all too well. It’s something I have been working on though! *Footnote*

Example of a scene I play out in my head when the student, we’ll call her Sally, says I’m too young to work there: I reply without a missed beat “old enough to be creating your schedule every 6 weeks and in charge of your grades, when  you’re 45 years old and I’m only 23. I’m making more money than you and guess what? You are NEVER going to make it in the medical field because you have a nasty attitude and have zero self-confidence or self-motivation.”

It gets worse..but it’s pretty embarrassing and I’m not proud of my nasty inner-bitch so I’ll leave it at that! SO when I’m constantly dealing with rude students, coworkers, and restaurant guests and  have to reply to their comments with “oh, let me see what I can do for you, don’t worry I’ll make it better,  you are right I AM just a stupid ignorant waitress” (true story, someone actually did call me a stupid hard-headed ignorant waitress)…this HAS to have an effect on you. We all know bottling up emotions is not good for the soul, body or brain. I believe this is partly where the sleep talking comes into play. Why not get out the nastiness in my sleep when it can’t actually threaten my job, or someone elses life? 🙂 The only person it really affects is poor Isaac. But I think he is used to it by now.

So now for a few memories of the not-so-nice Courtney coming out to play:

My good friend from college, Danielle, reminded me of this gem. When I was a freshman at Wingate University I had an allergic reaction to something. She took me to the ER and I was treated with an insane amount of IV benadryl, epinephrine, and steroids. This is a pretty sweet trio if you want to feel like you have been doing blow and taking horse tranquilizers simultaneously for 48 hours straight. I should have known this would make for more realistic and insane dreams than normal! After recovering, the doctor discharged me and told Danielle to sleep with me that night to make sure I wouldn’t rebound at all. Danielle was pretty much planted in my dorm room 24/7 anyway so this was no trouble.

That night I slept on the top bunk and she was on the bottom. As she was drifting off to sleep she heard me say in a demonic sounding voice “shut up Dani.” Dani replied “what?” Again I said “shut the F^*# up Dani or I will kill you.” Poor Danielle, she had no idea if I was asleep or awake or what was going on. I’m not too sure of the details after this as it was a long time ago and I was…errr, asleep. Maybe she can leave a comment and fill in the blanks 🙂

Another one of my favorites from college: Dani was sleeping over and in the middle of the night I started screaming that there was a gigantic spider in the bed. Dani and I were new friends and at this point she had no idea what she was getting herself into when deciding to sleepover. As I continued screaming and crying that a gigantic spider was taking over my bed, Dani LEAPS from the top bunk and nearly injures herself on the landing. She immediately started to try and find the “gigantic spider” that was tormenting me (still has no idea I am asleep). I threw a blanket off of my bed and pointed at it and said “THERE IT IS, IT’S RIGHT THERE!” Dani says “oh it’s in this blanket?!” Still frantic I said “no that’s it, that’s the spider!” At this point Dani realizes something is not right. She starts to calm down and says “this big blue thing (the blanket) is the spider, Courtney?” Finally happy that she understood I said “YES!” It’s not hard to imagine what happened next. Dani explained to me that it was a blanket and not a 4 x 5 ft., blue, soft spider. I woke up shortly after and we put all the sheets back on my bed. Dani was a good friend for constantly dealing with the terrors I seemed to suffer from that year! 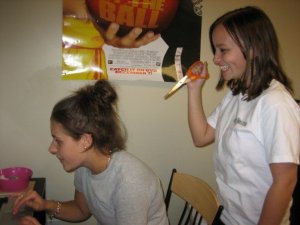 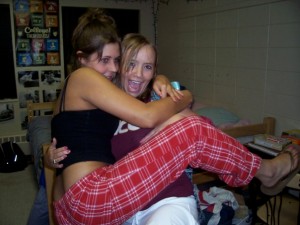 Footnote: I have since come up with a much better comeback for Sally. Next time she says I am too young to be doing my job. I am going to say “wow, how much do you weigh?” when she looks at me horrified I will say “yeah, I didn’t think questions like “how old are you” and “how much do you weigh” are socially acceptable yet.” Ahhh that feels good. I hate to admit that I’m actually very excited for our inevitable confrontation. See ya soon Sally!

2 thoughts on “When Sleeping Friends Attack”